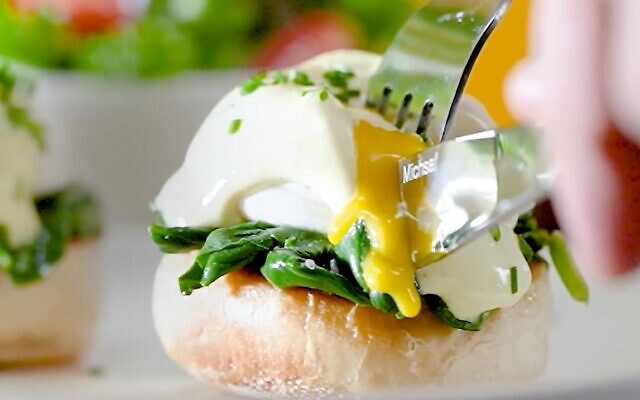 An Israeli food tech startup is serving up what it calls the world’s first plant-based poached and fried eggs (also known as sunny-side up eggs), aiming to debut in US restaurants later this year following a seed round of $5 million.

Yo! Egg (also Yo-Egg) was founded in 2019, developing an egg-free product that produces poached and fried “eggs,” complete with the equivalent of the egg whites and runny yolks but without the cholesterol, the company says. It uses a blend of plant-based proteins, water, sunflower oil, soy, flour, “and a few more simple ingredients,” all 100% vegan, to make its “whole egg” product.

The startup, based in the northern town of Pardes Hanna, operates in a global vegan egg market that is expected to grow to $2.6 billion in value by 2026, up from about $650 million in 2019, according to a 2022 Research and Markets report.

The company is also one of several global brands, including Vegg, Just Egg, Crackd, and Israeli startup Zero Egg, that are already offering plant-based egg products such as egg replacers or mixes for scrambled eggs or omelets.

However, Yo! Egg focused on developing the “whole egg” experience for those who prefer the taste and texture of cooked eggs. The startup also has a line of boiled “eggs” in development.

This week, it’ll tout its wares at the National Restaurant Association trade show in Chicago, one of the most prominent events for the American food and beverage industry, through May 24.

“The Yo! Egg team has a unique mix of extraordinary product innovation expertise and engineering talent that we believe will help our company revolutionize the way the world produces and consumes eggs,” said company CEO Eran Groner, who co-founded Yo! Egg alongside Yosefa Ben Cohen, who serves as CTO, and Nisim Ben Cohen, COO.

The company’s stated mission is to become “the largest and most sustainable egg producer in the world, without the chickens” while holding “the cholesterol, cruelty, and climate change.”

Yo! Egg’s offerings are available in Israel at Benedict restaurants, a chain that focuses on breakfast menu items (like eggs Benedict), and the company said it hopes to also be on menus at eateries in the Greater Los Angeles area by the end of this year.

“With hundreds of millions of people across the world demanding plant-alternatives for their favorite proteins, Yo! Egg’s first-of-its-kind eggs will be a hit in restaurants nationwide,” said Levy-Weiss, who serves as general partner at NFX, in a statement.

Stray Dog Capital Partner Johnny Ream said of the company, “With over 95 billion eggs consumed every year in the US, and each egg requiring 53 gallons of water to produce, we need a better solution.”

“Yo! Egg has developed one of the most impressive plant-based products we have seen to date, and we believe both the product and scaling innovation the company is pursuing will give them the potential to drive significant growth and impact,” said Ream.

Groner said the company would use the funds to build production and commercial operations in the US.

Plant-based eggs, dairy, and meat — also known as the alternative protein market — are increasingly popular options with a growing share of consumers who consider themselves vegan, vegetarian, or “flexitarian” — people who eat a mostly plant-based diet with animal products occasionally thrown in. A recent poll in the US suggests that more than half of young Americans in their 20s consider themselves flexitarians. And the number of vegans in the US has increased by about 600% since 2014.

These consumers turn to plant-based diets for a variety of reasons, among them allergies or sensitivities to dairy, environmental concerns, animal welfare, and human rights. Such issues are driving ethical consumerism worldwide.

Israel’s alternative protein sector grew by about 450% in 2021 from the previous year, with Israeli startups in the field raising some $623 million in investments, according to the latest report by the Good Food Institute Israel (GFI Israel). The nonprofit organization seeks to promote research and innovation in food tech.

Like it or not “Plant Based Meat” is a flop

Is plant based meat really healthier?